The beginning of the story 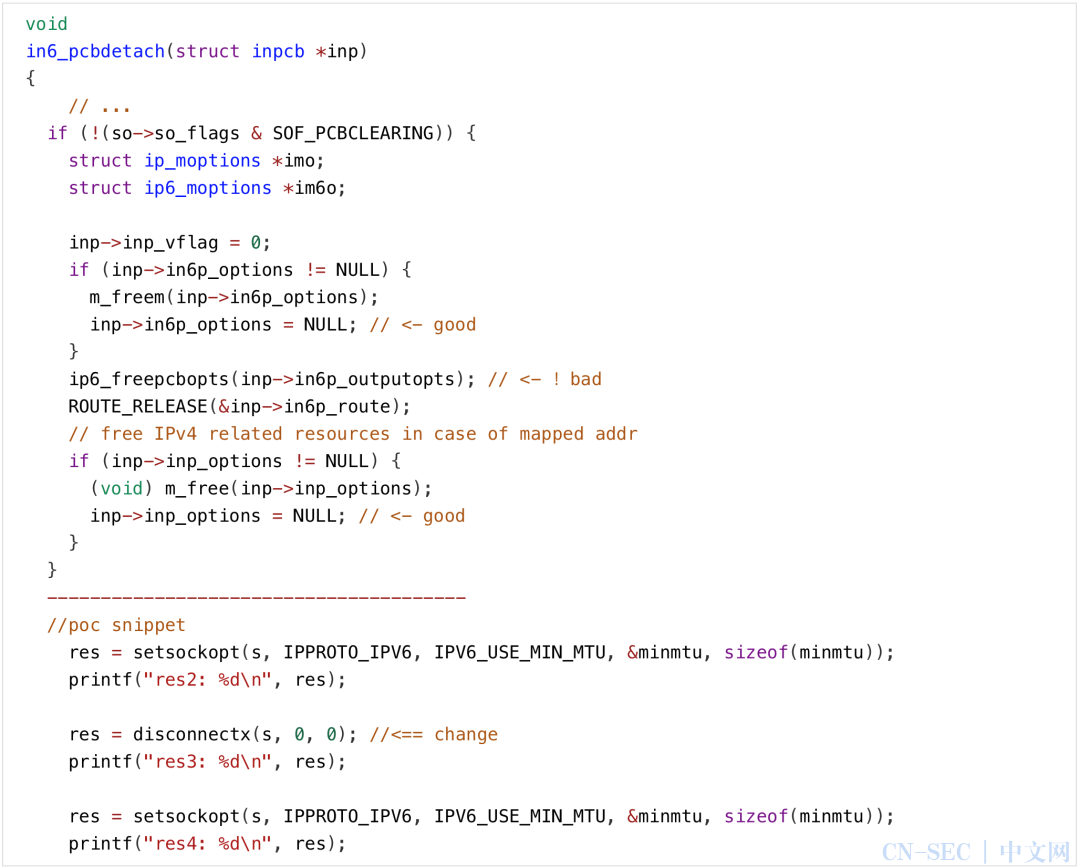 According to the poc, we noticed that disconnectx changed the status of a socket : the options are freed but not cleared, so they can be used after they are freed, leading to a security issue.

After learning the vulnerability, we tried to find some new functions, which may change the status of socket like disconnectx(). Finally, we found the function shutdown().

There are three modes for shutdown: SHUT_WR, SHUT_RD, and SHUT_RDWR. When you call the function shutdown on a socket with mode SHUT_RD or SHUT_RDWR, it will add SB_DROP flag to the socket.

And we found that, in the function sbappend(), SB_DROP flag is a condition to check whether a mbuf needs to be freed or not. As we can see below, at the very beginning of sbappend, if a socket has the SB_DROP flag enabled, sbappend will release the mbuf and return 0.

Then we begin to check the code where sbappend is called, at last we found a double free vulnerability in nstat_control_send. 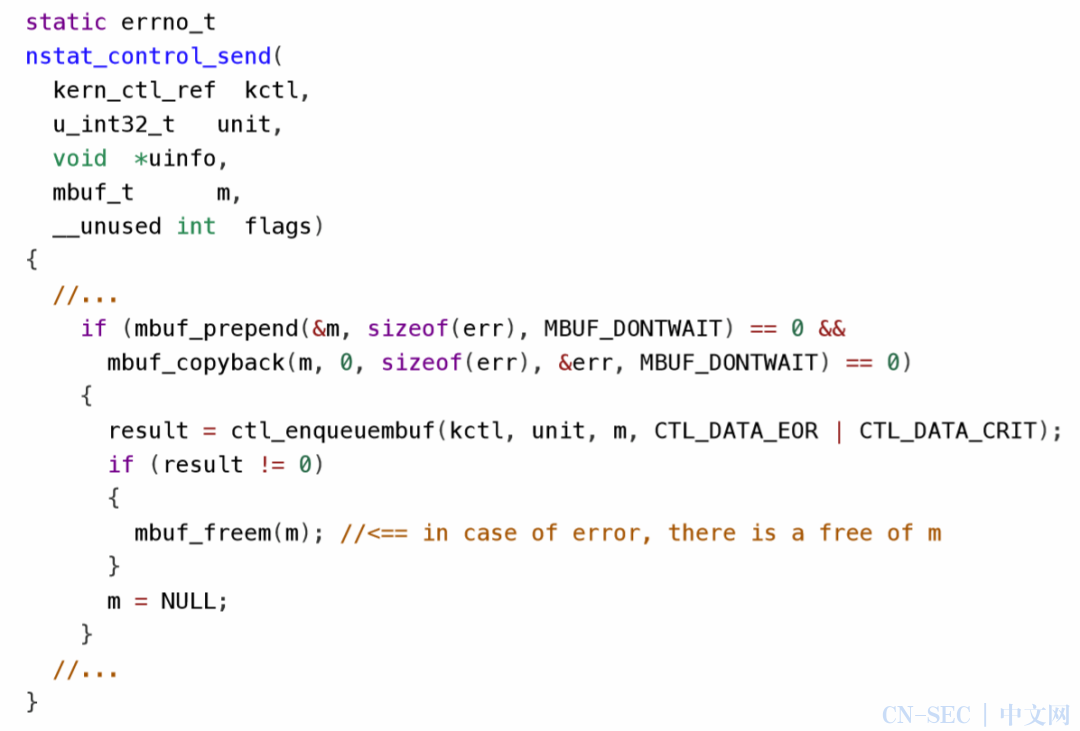 Inside ctl_enqueuembuf, it will call the function sbappend to add the mbuf to the rcv list. Note that if sbappend fails, ENOBUFS will be returned.

From the code execution above, we can see that, when we send data to a networkstatistics kernel control socket that has the SB_DROP flag enabled, the function sbappend will first free the mbuf struct, and the return 0; then ctl_enqueuembuf returns ENOBUFS to nstat_control_send. At this point, nstat_control_send will free the mbuf struct again, resulting in a double free vulnerability.

Shortly after we reported it to Apple,we noticed that Ned Will also released a very similar vulnerability in the function ip6_notify_pmtu. The both vulnerabilities are actually caused by the opaque semantic of the function sbappend*(). But Ned Will trigger it in a different way.

After we studied this vulnerability again, we found there are two ways to make sbappendaddr() free the mbuf and return 0.

Our way to trigger it: 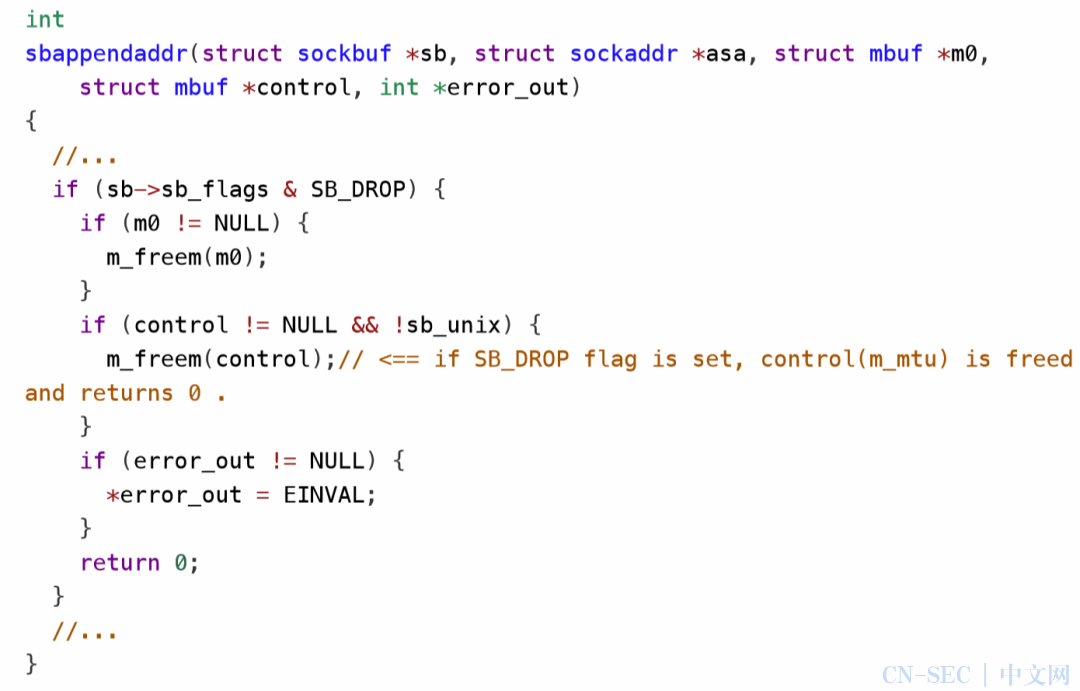 when we send data to a socket that has the SB_DROP flag enabled,the function sbappendaddr will first free the m_mtu, and the return 0. At this point, ip6_notify_pmtu will free m_mtu again, resulting in a double free vulnerability. 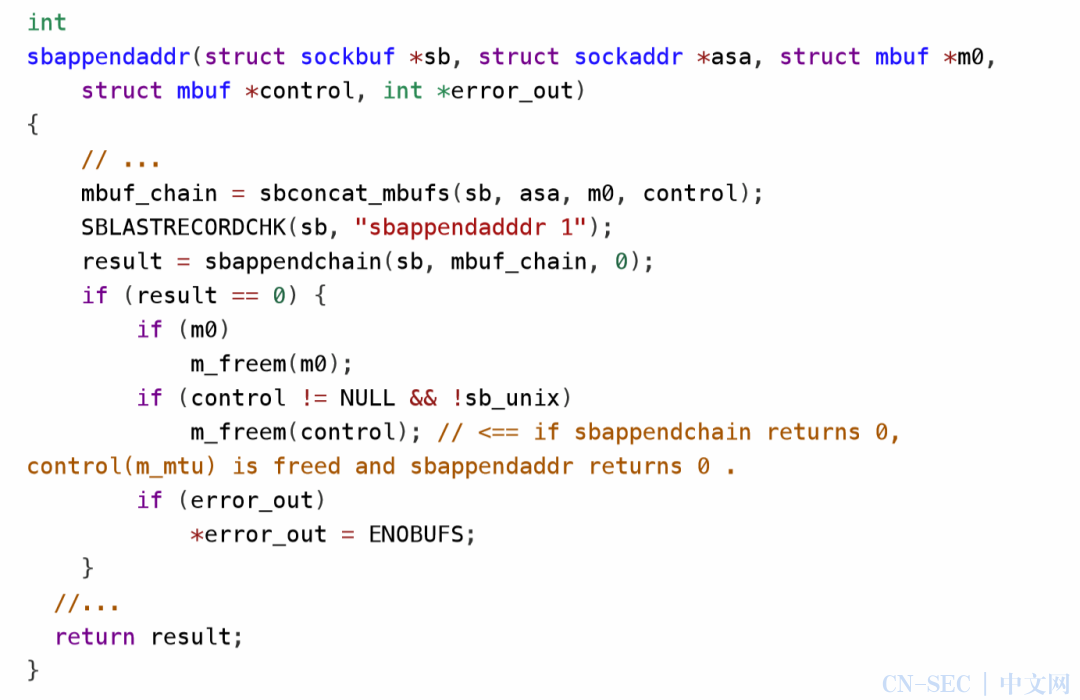 Let's take a closer look at sbconcat_mbufs. If the sockaddr have a super long socket length, this will make sbconcat_mbufs failure, and then leads to sbappendchain returning 0. As a consequence, sbappendaddr will m_free m0, and return an error.

After we studied the vulnerability and investigated the usage of sbappend* family functions in XNU, we developed a static anlayzer and wrote a rule to help us find similar vulnerabilities. At last, we found a new mbuf double free vulnerability in the function flow_divert_data_out. Vulnerability characteristics are as follows: 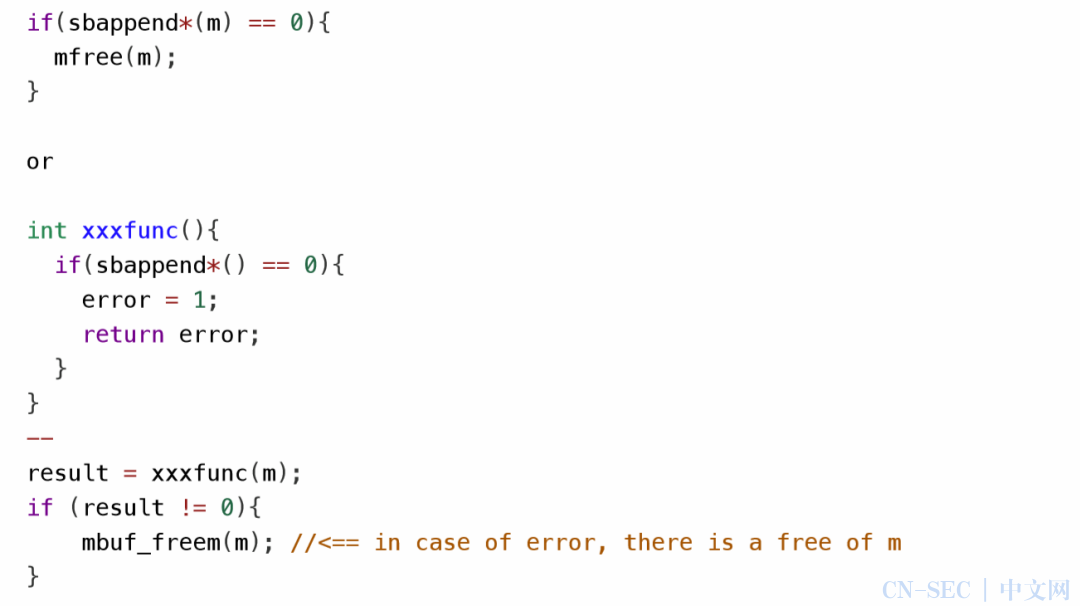 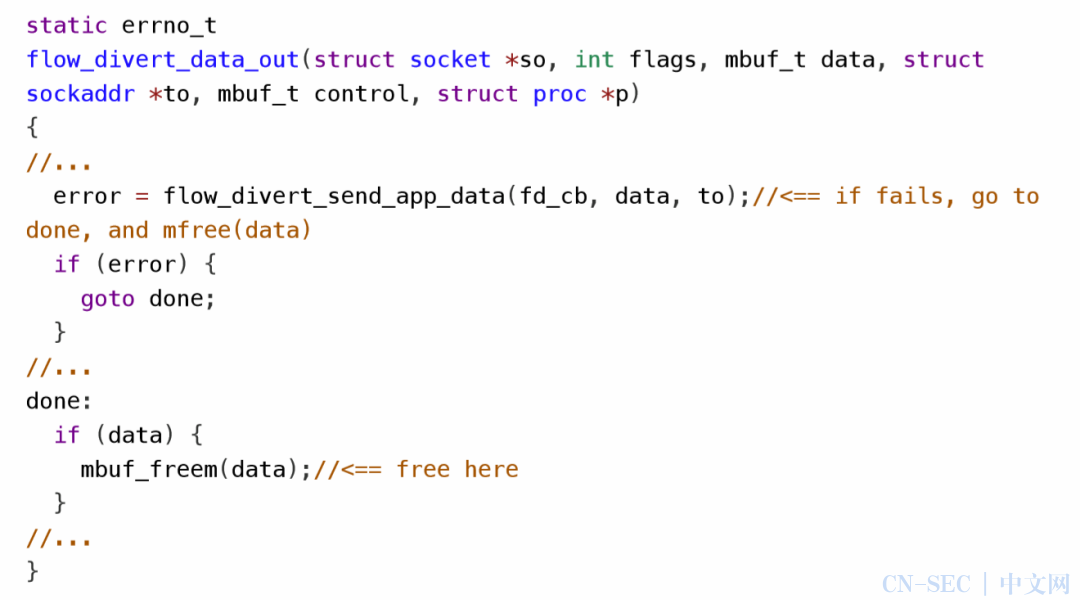 Inside function flow_divert_send_app_data, we can find that, for a DGRAM socket, flow_divert_send_app_data calls the function sbappendaddr to append the mbuf to the socket sending queue. The question is, if the destination address (i.e., toaddr) is incorrect, for example, having a super long socket length, this will make sbconcat_mbufs fail, and then leads to sbappendchain returning 0. As a consequence, sbappendaddr will m_free m0, and returns an error. 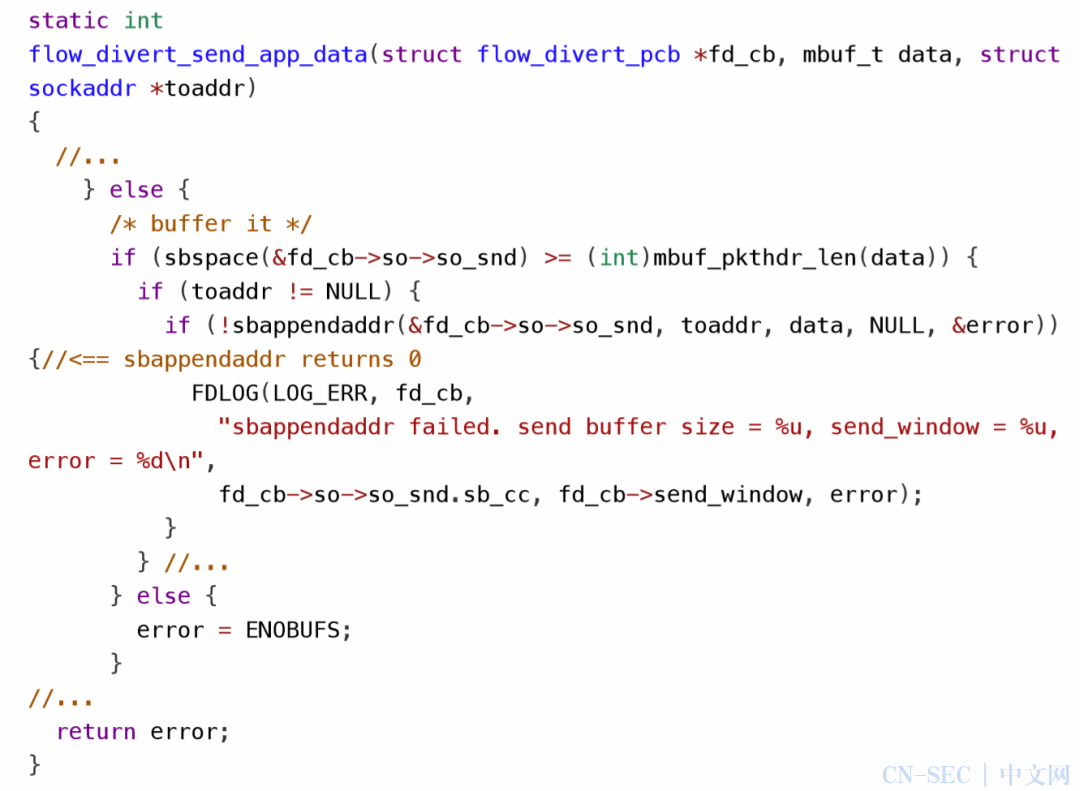 Studying publicly available vulnerabilities is very important to security research. In this article, we shared how we make the study process more effective and efficiency. We not only analyzed the root causes of a vulnerability, but also asked ourselves, why the developers made this mistake, how can we apply variant analysis to find other similar vulnerabilities, how to create static and dynamic tools to accelerate the analysis? Now, it's your turn!